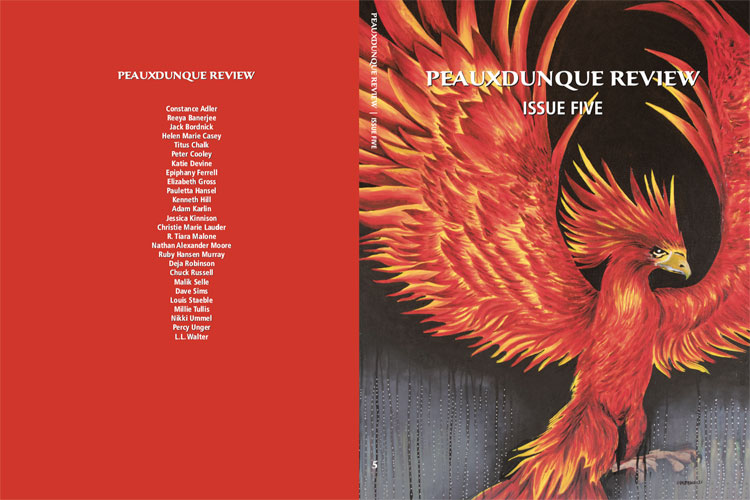 I sit in near silence, as I have for the last hour, transfixed by the artwork of Ramon Carrasco. As the sunlight fades from my home office, so does the dance of light on canvas, until there is nothing but warm embers in shadow. Our phoenix has retired for the evening, ready to catch fire again at first light. If you’re reading this, you likely know I’m speaking of the stunning mythological creature that adorns the cover of Issue 5 of Peauxdunque Review—our fiery phoenix. When the Peauxdunque collective commissioned the painting last winter, we knew it cliché, a little too on the nose, but we simply couldn’t resist that audacity of hope. I still can’t, not really. A life devoid of hope is … well, its own death, and there’s been enough reaping already. I’d rather return to our phoenix, if you’d indulge me, and the hope promised in the pages within.

The symbol of the phoenix is rather ubiquitous, and quite simplistic: fire, ash, rebirth. This is definitely the metaphor we had in mind last winter. Too many months later, we’ve witnessed a plethora of fire, mountains of ash, but still await renaissance’s delivery. Damnit! Our campy metaphor had failed us. As the world burned (too often, quite literally), I spent hours staring at the glimmering canvas, or scrolling my news feed, searching for answers. It wasn’t until recently, when I revisited the many texts and emails I exchanged with the artist regarding our vision for the painting, that some meaning emerged. Ramon creates his images by applying layer upon layer of paint, sometimes twenty or more, to the canvas. It’s a fascinating amalgamation. How I witness his technique, since we live several hours away from one another, is by viewing the in-process images he sends, via texted pictures or series emails. When he does this, and sends me the current state of his creation, he will wait on my response before proceeding. Most of the time, I am blown away, and my responses are usually something along the lines of, “Wow! Incredible work. Is it finished?” because to my eye, I can’t imagine it being any better. To which he often responds, “No. It’s probably 65% complete. It’s still speaking to me, man.” And on we go. Toward the end of the process for the phoenix, I noticed that Ramon had these small, black lines of paint running from the bird’s body. He does this with all his work, but these seemed a bit more pronounced. When I asked him about them, he said simply, “Surviving ravens is messy business.” At the time, I laughed it off, assuming I knew what he meant. Upon further scrutiny, and out of a profound sense of responsibility to save our metaphor, a revisited those words with him, where he explained his understanding of the phoenix was one more of survival than actual rebirth, that it “outlived the ravens.” After a little digging, I found that one of the first mentions of the phoenix in a Greek didactic poem, attributed to Hesiod, called the “Precepts of Chiron.” I won’t bore you with a lot of ancient Greek poetry translation (like I could pull off any of that haughty declaration) but what I found, basically, was that the phoenix was known to survive, i.e., outlive, nine ravens. Since our mid-2020 issue cover, conceived in the midst of social, moral, and physical upheaval, was the raven, you can maybe see how I might jump at this self-fulfilling definition. I had my new metaphor for Issue 5 and my new mantra: stop awaiting resurrection; just survive the ravens.

Armed with my new and admittedly convenient outlook, I approached this letter and what our diligent Peauxdunque Review editorial staff and I had whipped up for Issue 5. With so many setbacks, restarts, losses, and disappointments, I was counting on the words, your words, to save the day, and you did not disappoint. After a delicious warm-up with our staff pieces by Peaux folks Emily Choate and J.Ed Marston, I reacquainted myself with the body of Issue 5. As luck would have it, the first story that seared my soul, “Dead Girl Summer,” by Christine Lauder, was also the one chosen by our magnanimous managing editor, Tad Bartlett, to lead us into the issue. I saw why right away, as this enthralling story so beautifully captures what we are all dealing with: the pregnant pause we’re crushed beneath, the waiting as death lurks, then the explosiveness of our will as we thrust forward and remove our “wool to show the wolf fur underneath,” too tired and angry to let fear rule us anymore. This theme, the anger at what death takes as others live, desperate for hope, carries on in Helen Marie Casey’s, “Your Tree,” with its apt depictions of “aloneness inside … loneliness,” and in Nathan Moore’s “Comorbidity,” as we, too, have had to learn to “die doubly,” oh so “Ready to build Something Shaped into the semblance of Living.” Both works by Elizabeth Gross have echoes of this writhing, burning survival as well. We are all caught “somewhere between what we can’t know and what we can’t say,” as testified to so beautifully in “passenger side window,” and in “Ghazal at the end of the World,” where “summer is unthinkable, hot black, and yet, I long to leap for it.”

But what of hope? Surviving death is not nothing, but it isn’t necessarily life, not the swooning wondrous life to which we most aspire. We start to get an answer, I believe, in the transitional “Mandarin Peel,” by L.L. Walker, where we are reminded that, indeed, “you can’t force anything,” because, “In time, everything will push its way out.” That simple wisdom is the start, the crack we all need in the bleak veneer. Armed with that, we can then experience the pure exuberance of Brian’s dance for his lost brother, Andy, in “This body also dances,” by Titus Chalk, where “he felt his own dumb laugh rise up inside him and convulse his entire body.” In the last lines Brian breaks free of his guilt and is, dare I say it, reborn. Yes, please. Give me some of that. And then, as we convulse and remember our laughter, we have the awe-inspiring, non-fiction, meta work, “Look,” by Constance Adler, where a younger Constance so beautifully captures where we are with “I raised my hand and said, ‘Absent,’” then goes on to take us back into ourselves, and slays us with the best advice of all, “Assume we know nothing, Write it all down.” So, that’s what we’ll do. We’ll keep looking. Keep fighting. Keep hoping. And we will, for however long it takes, survive the ravens long enough to rise up and write it all down. Please, dear Phoenix, light our path.

I’d like to thank all our brilliant contributors, whether they’re mentioned above or not, for informing and guiding my thoughts on Issue 5. All these gorgeous works, held up in a single light, have their own lessons for us, be they heartwarming or wrenching. Sure, I may have approached the work, post-acceptance, with a certain researcher bias, but I challenge you to absorb the body whole, and experience for yourself what patterns emerge.

Larry Wormington is a Dallas-based fiction writer who grew up in the piney woods of East Texas. He received his MFA from the University of New Orleans and his BA from the University of North Texas. His stories have appeared in Redivider, Elm Leaves Journal, Harpur Palate, and the fiction anthology Monday Nights, among others. He is a Marine veteran and a member of the Peauxdunque Writers Alliance. Professionally, he works as a technical writer and runs several small businesses in the greater Dallas area – the rest he saves for his Khaleesi and their four incredible children.