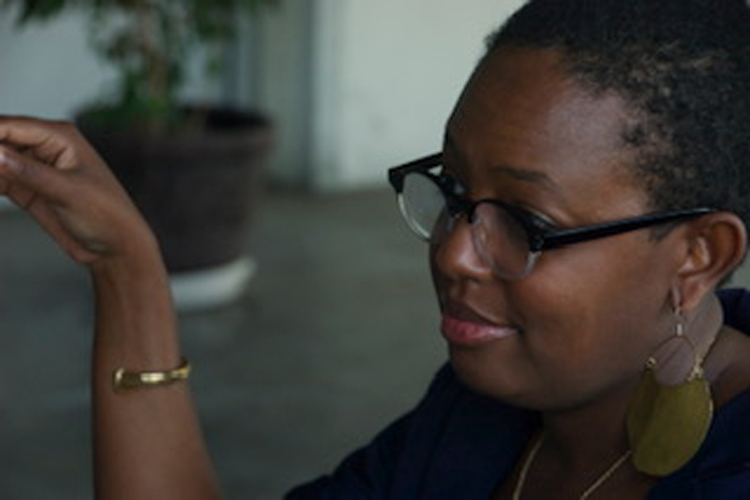 Emily Choate: Obviously, we are living through a brutal era, morphing and escalating every week. How are the current crises—including this period of self-isolation and distance measures—affecting you as a creative force?

Jamey Hatley: I think that it may be too early to tell. I think the last time that I had a real restaurant experience, I had taken my computer to the bar to submit something to a contest and needed to hit a deadline. I did it with a minute to spare, not realizing how quickly the world was changing. I must say that right before this period of exile, I thought that the world was untenable. That we couldn’t possibly keep up this pace. I would joke about all the ways that Big Mama Earth might take us out. Freeze, fry, flood, some millennia-old bacteria thawing, wildlife taking back their homes, earthquakes. Or maybe the robots or aliens would. I said, no worries, the planet won’t end, but people might.

It’s strange, I was raised an only child, so I am used to keeping my own company and quite enjoy it, but this has clarified what a solitary but social creature I am. I’m one of those clichéd people who write in cafes. I love to people watch. I love to disappear in plain sight, but I miss being in community with folk, even if I sometimes stand at the edge and peek in. I’ve been writing about a kind of magical pandemic, so I definitely understand the terror of the unseen more than I did before. I caretake for my elders, so my actions seem extreme to some of my friends and some of their choices seem reckless to me. Great for character development. Scary for living. And then lay the protests initiated by the killing of Mr. George Floyd, continued with Breonna Taylor and too many others before and after on top of the pandemic, everything is suddenly raw and urgent and loud. It always has been for some of us, just quiet. I was in Baton Rouge when Hurricane Katrina happened and I am still figuring out how that marked me, so yeah, I think it is too early to tell.

EC: On your website, the bio describes you as “obsessed with stories in ruin, at the very edge of being forgotten.” I love this description. How did this obsession first emerge in you?

JH: Guilt, I think. When I was an actual child (I started reading at three years old), I was always reading, so a few of my relatives made the leap to saying I would be a writer way before I ever considered it. I now realize this is not common, but I come from a family of educators. When I started to think about writing, my Uncle Julius would say, “You wanna write about something, come write about these blues people.” I thought I wanted to write about no such thing. I was very, very wrong. Utterly and completely incorrect. By the time I figured out my wrongness, lots of those blues folks had passed on. I try to write them into the record. This doesn’t just happen with people, it happens with places as well. A crumbling house that is suddenly demolished. The remnant of a staircase that goes to nowhere. Sometimes there is no real documentation of these people or places. These fragments bewitch me, stitch themselves together or tear my other ideas apart. I resurrect them through my imagination so that they will not be erased.

EC: When you sit down to read fiction, what are you most hoping to experience or discover?

JH: Wonder. I think that in fiction, wonder can come from almost anywhere in the story. Character, setting, plot, language. Wonder isn’t always some loud, flashy thing. Sometimes a story come along and just quietly takes your hand, sits you down in a chair, and then closes the door behind itself when it’s done. A different story might drag you along and then push you over a cliff. When well done, both are extremely satisfying.

EC: Last year, you made your first short film, “Always Open, The Eureka Hotel.” What new things did directing your film teach you about storytelling?

JH: I still get startled whenever anyone calls me a filmmaker, but I did make a film! I wasn’t intending to direct. I actually only knew days before that I would have to step in or the film would not get made, so the film became the first thing I adapted (from my own work), the first thing I produced, and the first thing I directed. At my MFA, we were required to study genres outside of our major, and screenwriting just seemed so perplexing and big to me. Also, once I learned that the director and not the writer is King in film, it just didn’t make sense to me. As I said, I was raised an only child and to work so hard on something and everybody was going to talk about the director? No way!

As for storytelling, when I started to look at scripts for films and television, actually a bit ahead of ever thinking that I would write one, I remember the first script that I really looked at was the pilot of Queen Sugar which was set in Louisiana and written and directed by Ava Duvernay. I actually started watching it because Kiese Laymon was always talking about it and I wanted to catch up! People kept asking me had I ever considered writing for the screen and on a whim I printed out the script and read it as I watched the show. I would discover that most of my favorite films were from writer/directors. Eve’s Bayou by Kasi Lemmons, Moonlight by Barry Jenkins, Daughters of the Dust by Julie Dash, To Sleep With Anger by Charles Burnett, Love Jones by Theodore Witcher, or Losing Ground by Kathleen Collins. All of these films are by writer/directors. By examining the work that I was drawn to, this began to tell me that the work I loved hinged on great storytelling.

My prose has often been called cinematic, which I couldn’t figure out if it was a compliment or not, but now I take it as such. Directing made me understand the power of quiet, not necessarily silence, but those moments of just getting to witness something unfold without anything spoken by a character. As a fiction writer I want to fill everything up with words, but the structure of screenwriting asks for breathing room. And into that silence goes the power of the image. As a director, it is up to you to articulate the precision of your vision to so many people, and then allow for surprises.

EC: Your love for Memphis feels abundant and rich. What can you share about how the influence of your hometown lives inside you as a muse?

JH: Memphis is one of those places that has a shorthand—bbq, Elvis, the blues. Sure, but it is so much more, and Memphis, my Memphis, is rarely recognizable to me in most works of art. It’s in the rhythm of the place, the textures that people miss. For years I was writing about one of those unnamed cities that was “like” Memphis. My mentor, Arthur Flowers finally said, “This is Memphis, right?” Maybe it wasn’t quite Memphis when I started years ago, but it is definitely Memphis now. Returning home after a decade helped me to see the ways that Memphis has marked me and claimed me and that I have done the same to it. I think that whereas New Orleans is a city that thrives on being mysterious, letting you know that you don’t quite know it, Memphis is a city that is happy to let you think you know exactly what it is.

EC: You’ve written about viewing yourself as a creature of both city and country, owing to the time you spent visiting your parents’ Mississippi stomping grounds. I’d love to know how that kind of split consciousness aids your storytelling, as well as the larger whole of your spirit.

JH: I think I used to be much more conscious of the split between country and city. Perhaps this is because every other Sunday my mother and I went to church in Mississippi. It is only about 15 minutes from my parents’ house in Memphis to the Mississippi state line, so I would always watch for the “Welcome to” sign on the way to and fro. The closer we inched to the border, the city seemed to dissolve into the rural as if by magic. Hot summers in a tiny house developed my eavesdropping, which sharpened my storytelling skills. Making that trip so often seemed a bit like time traveling to me. It still does. On both my mother’s and father’s sides of the family, there are people who stayed in the country and people who left. I think being able to look at both sides of the coin trained my imagination in a way. This small migration from city to rural that I’ve made hundreds of times let me understand that like most things in life, this distinction was never either-or for the traveler. As a girl I used to be obsessed with the designated borders and signs. As a woman, I’m now more interested in the unnamed crossings that only a native or the completely lost can locate. And what are writers but travelers, guides on journeys that we might never venture on otherwise?

Jamey Hatley is a Memphian obsessed with stories in ruin, at the very edge of being forgotten. Her writing has appeared in the Oxford American, Memphis Noir, Strange Horizons, and elsewhere. She was a Prose Fellow for the National Endowment for the Arts, a Rona Jaffe Foundation Writers’ Award Winner, and the inaugural Indie Memphis Black Screenwriting Fellow (selected by Barry Jenkins). She wrote, directed, and produced a short film based on her story-essay, “Always Open, The Eureka Hotel” which was an official selection of the 2019 Indie Memphis Film Festival and the Black Film Festival of New Orleans. Ms. Hatley is a member of the Writers Guild of America, East.