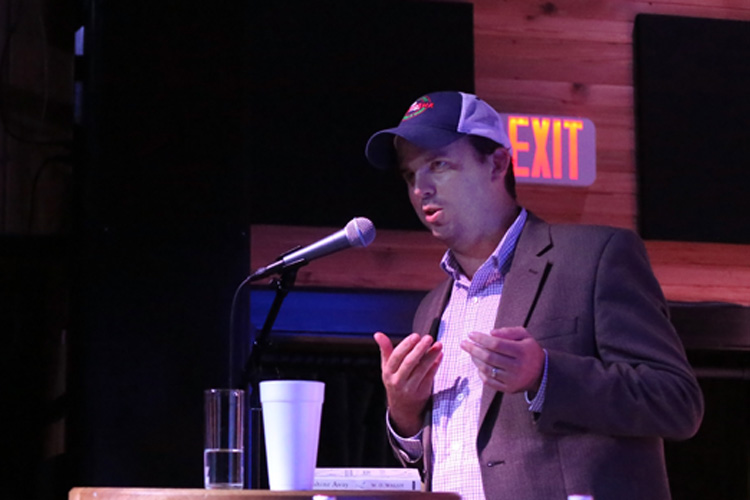 For this issue, we’re entertaining questions from M.O. Walsh, one of our favorite contemporary writers. In addition to being the author of literary page-turners including My Sunshine Away and his newly released The Big Door Prize, Walsh directs The Creative Writing Workshop at the University of New Orleans, where he has shepherded several Peauxdunquians through to their MFAs. He is a graduate of the MFA program at Ole Miss and continues his association with those environs through organizing the Yokshop Writers Workshop—an annual belletristic sojourn to Oxford, Mississippi. More than one writer has been recruited to join Peauxdunque while we were feeling our whiskey there. Walsh is a true literary citizen, and we are thrilled with his questions for this issue.

M.O. Walsh: What’s a single word or phrase that your editors think writers should use less often than they do? For example, anytime I see the word “frame” used for “body” in a story, I am immediately reminded that I’m reading something made up (since not many people use “frame” for body in real life conversation). That word sort of sucks the air out of the fictional world and makes me picture the writer sitting in their pajamas trying to sound interesting. I guess another way to phrase this question is: Are there any words or phrases that make y’all picture writers in their pajamas?

Ask Peauxdunque: Truly, an excellent question. We found we could not limit ourselves to words and phrases but also included tropes and punctuation. There are at least 25 oxygen-suckers and pajama-visions in the following example passage (see if you can spot them all):

He sat in the tavern throwing back shots of vodka and regaling Charles, the barkeep, with philosophical jokes about his cat, Descartes; however, the evening took a bitter turn when he caught sight of his 50-year-old face in the mirror and realized tears were gushing down his sallow cheeks.

“Charles, is that really how females really see me?” he queried bitterly. In anguish, his frame slumped over onto the bar. “Another vodka!” he articulated.

M.O. Walsh: A recent Scientific American article (https://www.scientificamerican.com/article/do-we-live-in-a-simulation-chances-are-about-50-50/) argues that, based on all the evidence, there is about a 50/50 chance that humans are currently living in a computer simulation. If this is true, and we are in a simulation, why do you think the AI included literary magazines in their simulation of human life? I don’t mean “why does it have literature,” in general. I mean, why does the simulation include lit mags?

A.P.: We’re so glad to find another enthusiastic reader of Scientific American. As it turns out, our own research shows that lit mags prove with 100% certainty that we do, in fact, live in a computer simulation. Consider this—lit mags defy every known metric for existence in the modern world. There is no business model that can account for them. They eschew every modern axiom for drawing an audience, offering no celebrities, no behavior bending algorithms, and no easily assimilated inanities. They are passionately, profoundly, and deeply focused on the authentic use of words in an era of uncontextualized sound-bites, tweets, and memes.

Lit mags are like the Great Pyramid of Cheops balanced primly on the extended trunk of a pink elephant who is standing unsteadily on a child’s inflated bouncy ball. What else are we to conclude except that lit mags are the fever dreams of people hopelessly out of step with reality as most people experience it? But, computer simulation or not, we wouldn’t want to live in a world without them.

M.O. Walsh: Speaking of aliens, which writers do PR editors think is/was likely an alien in human disguise and why?

A.P.: First, we must set aside obvious candidates like William S. Burroughs, Philip K. Dick, and to a lesser extent Kurt Vonnegut because they are too obvious. We figure any alien capable of traveling from a distant world to our planet could do a better job of concealment than masquerading as the inventor of the Blue Heavy Metal Boys, the Glimmung, or the Tralfamadorians.

With that as our starting point, we must logically assume that any aliens among our literary revered would have to be folks whom no one would suspect. This leads us to the irrefutable conclusion that Marilyn Robinson must be an alien. Think about it. A 21st Century Calvinist who writes literary smash hits about the almost microscopic vicissitudes of the experience of being human with utter and aching authenticity—none but an alien could pull that off.

J.Ed. Marston writes stories about people fumbling to be heroic in cloudy situations. His fiction, poetry, and non-fiction have been published in Bayou, The Double Dealer, Urban Land, Wired magazine’s blog, and the Atlanta Journal-Constitution, among others. Marston serves on the Board of the Southern Lit Alliance and on the planning committee for the Conference on Southern Literature. Marston is a graduate of Spring Hill College in Mobile, Alabama, where he earned a BA with a triple major in English, writing, and theater. He lives in Chattanooga, Tennessee.